In most the developed countries, cannabis has been legalized to some extent. The United States has rapidly followed the trend of legalizing cannabis in different aspects. However, at the federal level, the laws are strict as well.

Different U.S states have reformed the cannabis laws to make it available or unavailable for its residents. However, Illinois has been one of the states, where cannabis has been completely legalized for individuals. Also, the state authorities have a plan for more revenue through cannabis businesses in the state.

That means opportunities for marijuana enthusiasts in Illinois are more! Let’s find out what are the latest laws in Illinois concerning marijuana: 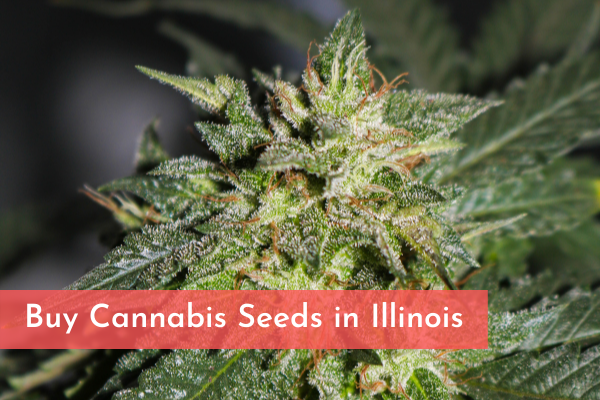 Is Cannabis Legal in Illinois in 2021?

Answering first of all the most queried question, yes! Cannabis has been legalized for medical and recreational purposes in Illinois from 1 January 2020. An adult resident of Illinois can possess, share, consume cannabis for personal requirements. In addition to that, medical patients in the state have a separate medical marijuana program under which they can access medical cannabis for treatment.

However, the complete legalization of marijuana in the state didn’t happen eventually! This took a long time and just to make you aware that in the earlier time, Illinois has prohibited cannabis usage in its region, due to certain reasons. Well, right now, in 2021, it has the most relaxed laws for marijuana enthusiasts.

Illinois people were already into cannabis-related activities away before legalization. That is why the cannabis-related offenses were also quite high in numbers in the region. Somehow, the government legalized it and also planned for earning revenue by encouraging the businesses.

The expected annual revenue after recreational legalization is around $4 billion for the state. Also, to encourage the cannabis businesses in the state, authorities have passed the Illinois cannabis regulation and tax act in 2019 and after that, it becomes the first state to permit recreational sale. In addition to that, the medical marijuana program in the region has benefitted more than 1,50,000 patients according to data. Along with the recreational sales and businesses, the government has also worked on medical dispensaries implementing low taxes on medical cannabis comparing to recreational marijuana.

Coming back to 2021, right now, you can have more cannabis opportunities in Illinois compared to the other states where complete marijuana legalization is still to be implemented or even to be approved.

History of Illinois State Regarding Cannabis

In the earlier time of the 20th century, Illinois was the state which was encouraging hemp cultivation to grow its businesses among people and as the hemp was converted into useful essential for homes, people were already into it. However, as the growers were introduced to marijuana’s psychoactive effects, there was drastically change in the state concerning productivity and offenses.

Also, during that time, there was a global movement to prohibit marijuana and therefore ultimately, the government prohibited recreational marijuana in 1931. At that time, cannabis and its related businesses almost vanished. Even within the upcoming 50 years, there were no major changes in the legislation until 1978 when Cannabis Control Act came into the effect.

The ultimate goal of this change was to allow medical marijuana in the state, although this change couldn’t be implemented completely due to some circumstances.

The complete medical cannabis was legalized under the (MCPP) Compassionate Use of Medical Cannabis Pilot Program Act in 2013. This legislative change will ultimately allow the medical patients to get prescriptions from the doctor and then to proceed further for medical marijuana. This program was ultimately aimed to benefit most of the medical patients and even around 1 lakh patients already participated in it within a certain period.

As the medical marijuana law came into the effect, people started demanding the decriminalization of marijuana in the state. Well, after three years of medical allowance, under 10 grams of cannabis possession was decriminalized in Illinois in 2016 with up to a $200 fine. Before it, the offense was treated as a misdemeanor.

However, just after one year of decriminalization, in 2017, the lawmakers proposed a recreational cannabis legalization bill though recreational use was completely implemented from 1 January 2020 in the state which ultimately allowed the residents to possess, share, consume cannabis for personal reasons.

In a nutshell, the legislative history of cannabis laws in Illinois was quite changing. Although historically it was banned, however, in recent times, people have witnessed some positive changes in cannabis legislation.

Current Laws in Action in Illinois

Doesn’t matter, how much the laws changed in history, if you are residing there or planning a trip to Illinois, then you must have to be aware of the latest laws that are in action in the state:

Cannabis possession in Illinois is legal and one can possess only up to 28 grams. However, one must be of adult age (above 18 years) to indulge in any cannabis activity. Apart from this, public possession also should be within the limits.

The adult residents of Illinois are allowed to grow up to 5 plants per household. Well, 5 plants per individual are more than enough. Although the state also permits to grow up to the same quantity of cannabis plants for medical patients as well.

Cannabis consumption is also legal in Illinois just like possession and cultivation. However, consumption made in public places is illegal. One cannot consume marijuana in places where minors are involved such as schools, university campuses, and parks. Also, the individual is not permitted to smoke marijuana in non-smoking areas.

Illinois state has tried legalizing medical marijuana from the earlier time of 1978. However, at that time, due to certain reasons, the government could not implement it. Later on, after several years, in 2013, the Compassionate Use of Medical Cannabis Pilot Program Act (MCPP), took effect in the state which was aimed to benefit medical patients in the state.

Overall, the medical marijuana program in the state is completely aimed to help medical patients. Though the state has been legal for both recreational and medical cannabis, businesses have also increased along with the government’s revenue.

How to Buy the Best Cannabis Seeds in Illinois?

As cannabis cultivation is allowed in the state, there will be no restriction for cultivating marijuana plants for personal needs. Medical marijuana enthusiasts are also permitted to have cannabis plants in their homes. Now, the question that comes to your mind is that how can you get the best cannabis seeds which can give the most output in your garden.

Although there might be some physical stores selling quality seeds in the state, however, that might not be a better option. As online seed banks have multiple benefits. Online seed stores have a wide selection of cannabis seeds with different varieties that you can choose from. In contrast, offline stores have limited strains and quality might also differ. Apart from this, online stores have the better and fresh quality of cannabis seeds as they directly import from the breeders.

Most importantly, online seed banks provide you the freedom to choose any strain in the world along with huge discounts during the sale.

As you are at this guide, you don’t have to put effort into researching people’s reviews to find out the best seed banks on the planet. We have already done that work for you and listed below the top three seed banks that are stated as the ‘best around the world and marijuana growers love to buy cannabis seeds from them.

For U.S marijuana enthusiasts, this online seed bank is the best option! ILGM or ILoveGrowingMarijuana.com is the place where you can find out the different cannabis strains of the best quality along with excellent customer support who is eager to help in case of need. Multiple payment options and discrete shipping is available.

Crop King Seeds has one of the best stocks of marijuana seeds. Also, they cover almost every strain on the planet. At affordable rates, you can find out the latest seed strains on the market. Multiple options to place orders including bitcoin and instantly private shipping are the highlighting features.

Best for all types of cannabis cultivators, MSNL is a one-stop destination for your cannabis need. The shop holds a wide selection of seeds with the highest germination rate. Worldwide shipping at an affordable price range, excellent customer support, and a very huge market reputation are the key features of this store.

Future of Cannabis in Illinois

Right now, considering the current situation in the state, Illinois has the best marijuana laws favoring marijuana lovers. After complete legalization, the state revenue has increased rapidly. It has also given opportunities to multiple businesses in the region. Therefore, within the upcoming time, the state can witness some more profitable businesses where the marijuana enthusiasts will be benefitted more.