Cannabis in the different states of the United State has been legalized and Arizona is one of the latest states to get cannabis available officially from the previous year i.e., 2020. Although the previous year was not that much good for some people of Arizona’s marijuana lovers, November 2020 was the best month as cannabis got legalized after years of struggle and debate in the state!

Therefore, in this guide, you will get everything to know about cannabis in Arizona and ultimately a short guide on how to get the best quality cannabis seeds in Arizona for the best output in the garden. 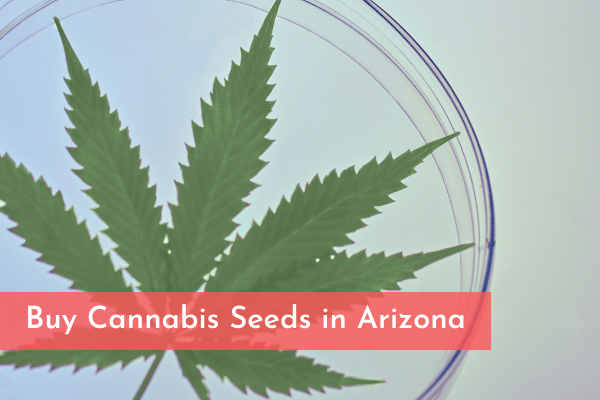 Is Cannabis Legal in Arizona in 2021?

First and foremost, let your doubt be clear: cannabis in the year 2021 is legal for recreational use. Well, if you have asked this question before November 30, 2020, then the answer might be something else.

Luckily, official authorities have permitted to let recreational marijuana to exist in the state from the mentioned date. Additionally, this has allowed many physical stores in the state to make cannabis available to the citizens which have enhanced the cannabis business in the state.

The experts have believed that the revenue earned by the cannabis business will be distributed and used for the development purposes of cannabis legislation, colleges, police service, and fire services. Well, you might not be interested in knowing that but the main thing is, after permission of cannabis consumption in the state the graph of marijuana business and revenue has uplifted.

Well, medical cannabis in Arizona state was allowed from a very earlier time and therefore, after certain guidelines, a medical patient was permitted to access the cannabis treatment. However, after medical allowance, there were many tries for legalizing recreational cannabis as well but most of the time attempts used to be failed, which we will discuss more in detail in the historical journey of cannabis in Arizona!

History of the Arizona State for Marijuana

Like the other states, Arizona has its own long history of the evolution of cannabis legislation. Before the late 20th century, cannabis was banned mostly in the state as at the federal level, the government had banned cannabis in the country.

Later on, from 1996, medical cannabis was allowed in the state but it was conflicting with the federal law. This law allowed physicians to prescribe medical cannabis to seriously ill patients.

Considering the medical marijuana importance and allowance, there was a demand increasing for recreational weed as well. Therefore, in the year 2002, there was a proposal to decriminalize recreational cannabis, which was hoped to allow the medical patients to possess up to 2 ounces of cannabis along with the cultivation of up to 2 plants. Additionally, the major purpose of the law was to decriminalize cannabis possession up to 2 ounces which were punishable by up to %250 fine.

Unfortunately, this law was failed by just 42.7% of the votes!

Well, this law also permits the cultivation of marijuana plants as a medical requirement only if the patient resides as long as 25 miles from the dispensary available in his/her region.

Later on, another try for legalizing recreational cannabis in the state happened in the year 2016 which was also failed with 48.7% of the vote. Well, this time the number was close and therefore, after 4 years, recreational marijuana in Arizona state was legalized on November 3, 2020!

In a nutshell, the history of cannabis in Arizona state was quite up and down but, in the end, the law was in favor to weed lovers in the state. That is why if you are planning a trip there and want to enjoy cannabis then there are high chances for getting 100% success!

As the government has changed cannabis laws recently, therefore, you have to be aware of certain guidelines that are in action in the state:

Possession, Cultivation, And Consumption of Cannabis

After the legalization of cannabis in Arizona, an adult of the state (whose age is above 21 years) can possess up to 28 grams of cannabis (up to 5 grams of marijuana concentrate). The over-possession of cannabis can lead an individual to authorities treating him or her as a drug trafficker, which is not permitted. Even in public places where minors (below age 21 and 18) are involved, you have to be extra careful.

One must be of the age of 21 to indulge in cannabis activity. As the government has zero-tolerance for those who consume cannabis below adult age. Also, sharing cannabis to the below adult age and possessing or consuming where cannabis is prohibited can lead to some legal issues.

Medical cannabis in Arizona was legalized in 1996, however, completely medical use was allowed in the year 2010. The law was approved by 50.1% votes.

This law ultimately permitted physicians to recommend cannabis to medically ill patients. Additionally, an individual can also cultivate cannabis plants if needed. Therefore, this law benefited medical patients in the state. After this legislative change, there was an increase in cannabis demand in the state. With that said, the first public dispensary was opened on 6 December 2012.

Well, certain changes occurred in this legislation in which one of the changes banned the medical possession of cannabis on college campuses. However, the Arizona Supreme Court ruled that this was unconstitutional in the year 2018.

In 2021, there has been the allowance of medical marijuana in the state and one can have access to medical cannabis after a recommendation from an authorized physician.

Who will get medical marijuana in the state?

How to Buy the Best Quality Cannabis Seeds in Arizona?

Well, after the allowance of cannabis in the state, you might be eager to get cannabis seeds and grow your own cannabis plants. However, the government has also permitted to set up regulations over the retail sale of marijuana. From January 22, 2021, the state-licensed sale of recreational marijuana has already started!

Coming to buy cannabis seeds then there are many options. Either you can get cannabis seeds from the licensed stores in the state or you can also buy from an online store, which is a better option. The reason for that is physical stores are right now very few and there is a high chance for poor quality and less variety of strains.

Well, therefore, there is no doubt, online seed stores will be more beneficial for you right now! As you might be puzzled among different online stores, therefore, we have listed here the world’s top seed banks that are highly reputed, reliable, and have 100% highest germinating seeds.

This seed bank is one of the most trustworthy, reputed, and has a wide selection of different varieties of cannabis strains. Ships quickly from the California warehouse. Has multiple payment options along with instant customer support. Join The I Love Growing Marijuana Official Sub on Reddit for regular updates!

One of the most popular cannabis seed banks around the globe! Has best customer service, a wide selection of seeds, and multiple options to place orders including Bitcoin! Ships worldwide in a completely discreet manner. Ensures customer’s privacy!

Has a huge selection of cannabis seeds. The affordable price range of seeds, and best for beginner cultivators. Has almost every category of cannabis seeds. Ships privately and delivers within 4-7 working days. Customer support is excellent. MSNL seed bank has got 5.01 user ratings on SeedFinder out of 10!

Future of Cannabis the State

Recently the state government has legalized cannabis in the region and authorities are planning to generate revenue from the tax over the cannabis business. Therefore, in the future, the recent cannabis legislation change can contribute to the economical progress of the state.

In a nutshell, the future of cannabis in Arizona is brighter for cannabis lovers!