Marijuana has been a debating topic in most countries and states where the laws are against it. Although marijuana has shown its effects in the medical field, the authorities have started considering its importance in different aspects including the medical field. Although legalizing for personal usage is still a debatable term in most of the state. With that said, Iowa is one of the U.S states where the laws are quite strict and personal marijuana usage is strictly prohibited.

Although the state has a history of many attempts in favor to legalize it, somehow, the state couldn’t make it legal till 2023. 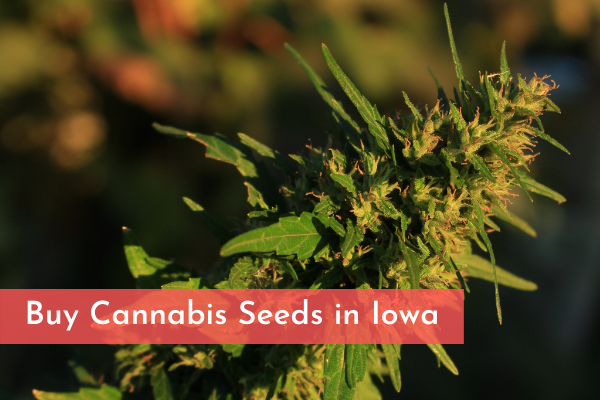 In short, No! In detail, read along!

Although Iowa’s laws do not permit one to use marijuana recreationally, however, some recent legislative changes allow its residents to access marijuana CBD oil with 3% or less THC content. Even this content can be accessed from the authorized dispensaries only. Therefore, one cannot share or sell marijuana stuff without a license.

Well, a small amount of marijuana possession in the state is a misdemeanor and therefore, if the offender can prove that the seized quantity is not for distribution then the charges will not be as hard as a felony. Therefore, even possession of marijuana can lead to some penalties in the state.

However, even apart from such hard guidelines, the state has a regular update in the legislation in which mostly there were attempts to make marijuana available in the state. Well, we will discuss that in detail later on.

Coming back to right now, in 2023, the state has not introduced any medical marijuana program or recreational law that can allow its residents to access cannabis in the region.

History of the Iowa Regarding Cannabis

In the very earlier 20th century, the state followed the world trend to prohibit marijuana in the state and banned cannabis for the people. Well, that means the people of Iowa were already aware of marijuana and its uses in different aspects. No doubt! At that time, there was a trend of hemp cultivation in the U.S and even its business was quite popular. Well, when the marijuana ban took a trend worldwide then most of the states including Iowa banned it during the 1920s.

Some years later, at the end of the 20th century, marijuana’s acceptance in different regions started to appear, and hence, there were attempts to make it available again officially. Even during the 1970s, there was legislation introduced for decriminalization. Unfortunately, that time, it got failed.

Well, at that time, due to demand in the medical field Iowa’s administrative rules permitted medical use in the region through a therapeutic research center. Although this ruling was only for the 1979- 1981 period.

Several years later, again, people tried to decriminalize marijuana in 2014 and even authorities proposed a bill, however, this time bill was failed due to the deadline.

Finally, in the same year, Governor Terry Branstad signed into law of the Medical Cannabidiol Act to allow the use of CBD oil after a recommendation from the physician for treatment of epilepsy in children. Although the law came into the effect in January 2015 and some people even claimed inconvenience in getting the CBD oil.

Later on, this existing legislation got expanded in 2018 and 2020 year.

Overall, cannabis laws were changed historically in the Iowa state and people have regularly demanded more for medical legalization, however, it is still made to be legalized in the state.

Current Laws in Action in Iowa

Doesn’t matter you are planning a trip to Iowa or already residing there, you must have to be aware of the current laws in action in the region to make sure you don’t create any trouble regarding cannabis:

Cannabis possession in Iowa is illegal and except for the small possession, the offender can be charged with felony penalties. Until the offender didn’t prove the seized quantity is for personal usage and not for distribution.

Even in 2015, Cedar Falls tried to decrease the police enforcement for under one-ounce possession of cannabis, however, this proposal was also failed.

Cultivation of cannabis in Iowa is illegal in 2023 and even medical marijuana is not permitted in the state, therefore, there is no cannabis cultivation business or legal shop that can sell marijuana stuff.

Marijuana consumption in the state is illegal and not allowed either in public or private spaces.

There is no medical marijuana program in the state, however, CBD oil with limited THC content is permitted for several medical conditions. Also, only qualifying adults and patients with prescriptions from a physician are allowed to access CBD oil from out-of-state sources.

Well, until the authorities didn’t make any cannabis program for medical marijuana enthusiasts or medical cannabis is not legalized, residents of Iowa can only access limited THC contented CBD oil.

How to Get the Best Cannabis Seeds in Iowa?

However, possessing cannabis seeds should not create legal trouble as the authorities will put fines and charges only when you will try to cultivate them. Although we strongly recommend you to confirm from the local authorities and only then do something related to marijuana.

Well, once you are legally comfortable possessing cannabis seeds in Iowa state, you can search for online seed banks and can get the best quality seeds. As there are no physical businesses regarding marijuana, therefore, you have to get your favorite marijuana seeds from online stores.

Also, these online stores have multiple benefits. One of the major benefits is that you will be having an option to select cannabis seeds from a wide variety of strains. Additionally, online stores have regular offers on their shops, which can give you the best marijuana seeds at affordable rates.

One of the most reputed, bet seller seed strain shops. Has multiple payment options. Ships to the U.S directly from the California warehouse. Excellent customer support and a wide category of marijuana strains. Join The I Love Growing Marijuana Official Sub on Reddit for regular updated!

This online store has one of the largest stocks of seed strains. Crop King sells almost every variety of marijuana seeds. Multiple payment options and 24/7 chat support are the highlighting features. Crop King Seeds strains got reviews of the SeedFinder users, with an average rating from 5.18 out of 10!

Sells high-quality seeds at a very reasonable price. Bulk seeds can be purchased at discount. Ships worldwide and delivers within 7 to 15 days. Instant customer support and a wide category of marijuana seeds for every cannabis enthusiast are the highlighting features.

1. When will be marijuana legal in Iowa?

Considering the current scenario in the state, we cannot predict that how much time it will take to legalize marijuana completely. Although many authorities have shown interest that they will propose medical marijuana bill soon.

2. Does Iowa support the legalization of cannabis?

3. Can I get medical marijuana program card in Iowa?

Future of Cannabis in Iowa

Iowa State has faced regular marijuana legislation changes. However, most of the changes were unsuccessful in legalizing marijuana completely either for personal usage or medical usage. Well, considering the polls taken recently, Iowa people are interested in legalizing medical cannabis more. Therefore, within the upcoming time, it is hoped that medical marijuana enthusiasts can witness some positive legislative changes.

Until then, you can stay under the laws and can enjoy other things!