Marijuana is getting accepted worldwide in different aspects of people’s life. Either it is for industrial purposes or medical purposes, marijuana has been showing its positive results. That is why most of the U.S states have legalized only medical marijuana to some extent whereas personal marijuana usage remains illegal, even at the federal level! 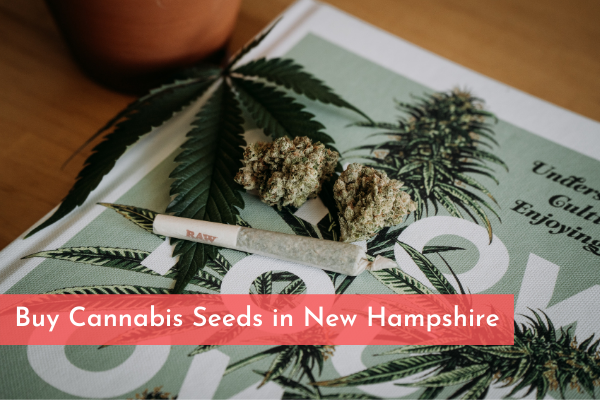 With that said, New Hampshire is the one of U.S states with only medical marijuana legalization. Even just for the medical use of marijuana, the state has quite restrictive laws, which we will be discussing in detail in this guide.

That is why either you are thinking to visit New Hampshire or already residing there you must have to be known the marijuana laws there before indulging in any kind of such activity. Read along to be an expert on the cannabis legislation of New Hampshire.

Before thinking about marijuana in any region, this is the first question that comes to most of the mind. To answer that, yes! Marijuana is legal in New Hampshire for only medical usage. Recreational marijuana remains illegal in the state. That means one cannot access personal marijuana stuff in the region as it comes under a punishable offense. Although medical patients within the state can get medical marijuana facilities by following the guidelines, which we will be discussed further under the medical marijuana section.

Even though medical marijuana is legalized in the state, however, it is quite restricted to people in urgent need. That means medical marijuana can be accessed to those patients only for which other treatment methods have failed. Additionally, this law has restricted medical patients to grow their own cannabis plants in their homes.

So, in short, the latest laws in the state do not permit anyone to possess marijuana for personal usage as recreational use remains illegal in the New Hampshire state while medical marijuana is permitted, although it is regulated in such a way that accessing medical cannabis in the state might be little tough.

The state’s ancient history is not available regarding cannabis, however, up to the end of the 20th century, the state was fighting to make at least medical cannabis available officially. Although in 1997 the state legislator Timothy Robertson proposed a decriminalization bill, which was the first unsuccessful attempt in the region regarding relaxing cannabis laws.

However, later on, the state didn’t make any further changes in the cannabis legislation until 2013 when Governor Maggie Hassan signed into a law allowing medical patients to consume cannabis for their treatment. Since then, New Hampshire became the 19th state in the nation to legalize medical marijuana.

Well, the state has very strict regulations for applying this law in the state. As medical use of cannabis was permitted to the patients with ‘chronic or terminal diseases.’ Also, medical cannabis treatment was only allowed to prescribe when other treatment methods have failed. That is why this bill was noted as one of the stricter MMJ bills in the nation. Apart from this, medical patients of the state were not permitted to even cultivate their own cannabis plants. So, we can say that the people of the state were not completely allowed to access marijuana for medical purposes.

Later on, just after one year of this medical cannabis legalization, another bill was proposed in the state in the year 2014. This bill was aimed to allow the adult possession of cannabis up to one ounce of marijuana by people of age 21 or above. Also, this bill could specify the regulations of retail production and sale of cannabis in the state. Unfortunately, the bill was failed.

After three years of this failed attempt, in the year 2017, the successful attempt for marijuana enthusiasts occurred when New Hampshire decriminalized cannabis while limiting the $100 penalty for the first and second-time offenses. While for the third time offense, the penalty will be of $300 monetary fine.

While another law went into effect in the state on 11 December 2018, when the Hemp Farming Act of 2018 enabled the federal legalization of hemp.

Summing up the historic journey of the state regarding cannabis, major changes in cannabis laws have occurred within the past two decades. Although recreational marijuana is illegal in the state, however, the authorities are trying to benefit the medical patients of the region through the medical marijuana program. Well, still, there is much space for improvement under this program.

Currently, there are certain guidelines and regulation which one need to follow apart from the local laws. Some of which are mentioned here:

Personal marijuana possession is decriminalized and therefore, up to three-quarters of an ounce is a punishable offense with up to a $100 fine. While subsequent offenses may lead the offender to more harsh penalization.

Medical patients can possess marijuana for medication after legalization and this limit is set up to 2 ounces.

Cultivating marijuana plants for personal usage or medical usage, both are illegal in the state and can lead to punishable penalization. Any offender found with 1 oz of possession with intent to sell is a felony and can lead the offender to up to 3 years of imprisonment along with a $25,000 monetary fine.

Public consumption of any kind of marijuana is illegal and even medical possession of marijuana in school or university campuses, public places such as parks, or gatherings remains illegal. Sharing marijuana with minors is a heavily punishable offense.

Apart from this, consumption made during driving a motor vehicle is an illegal and punishable offense under state law.

Once the patient gets diagnosed with any of the mentioned illnesses he or she can approach the physician where the physician can recommend cannabis treatment. After that, the patient or caregiver can register for the state’s marijuana program under the state’s registry portal. To do so, the following are the steps:

Step 1. First of all, the patient needs to get written certification by the physician for the illness and recommendation of medical marijuana treatment.

Step 2. After the doctor’s written certification, the patient can register under the official registry portal along with a state-issued ID card or other proof of New Hampshire residency.

Step 3. The patient needs to pay the application fee of $50 and then apply. If required, a patient can also designate a caregiver, which must be 21 years or above that and never convicted of a felony.

So, within these three steps, medical patients in the state can obtain medical marijuana facilities in New Hampshire.

In 2017, the state decriminalized weed for up to two-third of one ounce of cannabis possession. Although possession made more than the given limit can lead to a huge monetary fine.

Medical patients can access medical marijuana only from authorized dispensaries.

Future of Cannabis in New Hampshire

Right now, the state’s legislation does not permit anyone to grow cannabis or possess it. Although with very strict regulations, medical marijuana is permitted in the region. However, when compared to the other states where marijuana is completely legalized in any of the aspects and even the authorities have started earning revenue through raising the business market in the region, New Hampshire needs to improve its cannabis laws.

Therefore, overall, New Hampshire has one of the stricter medical marijuana laws in 2023 and if the government legalizes recreational marijuana then there might be an increase in cannabis opportunities in the state.

However, until then we have to stay under the guidelines and local laws.