Cannabis has been a wide topic to be discussed. Especially when it comes to legalizing in the country or state. In the U.S, many states have legalized cannabis usage to some extent though some regions have completely legalized medical and recreational usage.

Maine state is one of those states that have one of the relaxing laws regarding marijuana and recently it has completely permitted marijuana usage and sale in its region. Even historically, the state has been quite soft towards marijuana laws, that is why recent years back it becomes one of the states where the marijuana market is growing from scratch.

If you are planning a trip to Maine and thinking to enjoy marijuana then you must be aware of the recent changes in the laws, which this guide is going to cover. Read along to know everything about cannabis in Maine. 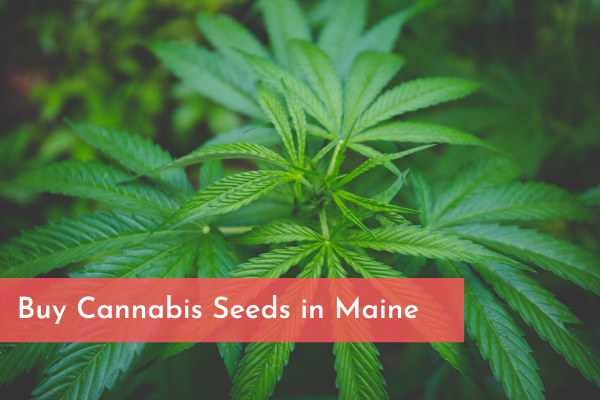 Answering your most doubtful question, cannabis has been completely legalized in Maine. Either for medical use or recreational usage, the authorities have permitted its residents to indulge in cannabis activities. Although there has been a separate guideline for medical marijuana enthusiasts, which we will be covering later.

However, in 2021, if you are looking for a ‘marijuana trip’ to Maine then there is no restriction from the government side as marijuana has been legal for recreational purposes. With this decision, the state has become one of the regions where marijuana laws are quite relaxed for enthusiasts. Also, this decision of the authorities has given birth to a new industry in the state by which they can increase the revenue.

On the other hand, it will also benefit the medical patients in the state allowing access to cannabis treatment whereas people can also get personal marijuana for their needs.

Well, the state has legalized medical marijuana way back before legalizing recreational marijuana. However, it has taken almost more than 15 years to legalize marijuana for the users not participating in the medical cannabis program.

In short, cannabis is legal in Maine in 2021 for both recreational and medical purposes. Although recreational cannabis got legalized after medical legalization still, ultimately, the state has one of the most relaxed cannabis laws for cannabis enthusiasts.

The history of the state goes a long way back to the starting of the 20th century when people know about hemp, cannabis, and its usage in different aspects. However, as the trend of marijuana prohibition took effect, Maine banned cannabis for all purposes in 1913. This decision made the state productivity of hemp and cultivation decline drastically. Still, the popularity of marijuana among people didn’t fade away even up to the end of the 20th century. As in between, the government didn’t take any major step towards cannabis legislation.

However, after the 1975 marijuana laws, the state became the third state to decriminalize small possession of marijuana. At that time, many states don’t have even a decriminalization law for marijuana but Maine did so, which showed the demand and popularity of cannabis in the region.

Later on, cannabis was widely showing its healing properties in the medical field and hence people demanded cannabis treatment and legalization of medical marijuana. Ultimately, on November 2, 1999, Maine legalized medical marijuana with the consent of a majority of people in the region. Therefore, the state has had cannabis existence from a very earlier time.

Yet recreational marijuana was not legalized in the state though Portland took the first step to legalize up to 2.5 ounces of cannabis possession in the city in 2013. Later on, Lewiston also followed to do so.

The complete recreational marijuana in the Maine state took effect in the year 2016 when the Marijuana Legalization Act was passed to permit adults for possessing and cultivating personal marijuana. Also, this law aimed to encourage the cannabis business in the state by allowing commercial production and sale in the state. However, the state authority will impose a 10 percent tax on commercial marijuana sales. Additionally, the local authorities will be able to regulate, limit or prohibit the operation of marijuana businesses accordingly in their region.

This decision made Maine completely legalized marijuana state. However, officially after two years of legalization, the cannabis businesses were settled to begin from the earlier time of 2018 though it got delayed. Later on, in 2020, the COVID-19 pandemic delayed it more.

Ultimately, the first retail sale from the dispensaries in Maine began on October 9, 2020, and this made the medical cannabis sale of over $100 million that year in the region. Therefore, you can get an idea that how much potential and opportunities that this state has concerning marijuana.

In a nutshell, the state has been regularly updated the marijuana laws in favor of marijuana enthusiasts. Even historically the state didn’t implement harsh guidelines and ultimately in 2021, Maine is the state where you can easily access marijuana without offending the laws.

Although the journey of marijuana laws was quite positive for the marijuana lovers in the state, here are the guidelines and laws which are in action for marijuana activities:

Possessing cannabis in Maine is legal in 2021 and the adult individual of the state is permitted to possess up to 2.5 ounces of marijuana. Further possession can lead one to offending laws, which may lead to a monetary fine.

Apart from this, Portland and Lewiston have already legalized the possession of marijuana before in 2014.

After possession, cultivation is also legally permitted in the Maine state. The authorities have allowed adult individuals to cultivate up to six flowering marijuana plants and up to 12 immature plants. For an individual, this is more than enough we can say. Additionally, the marijuana produced from these plants can be possessed by the owner, however, the cultivation of the marijuana plants should take place in a private space.

Consumption of marijuana is prohibited in public space and therefore, it can be consumed in private space only. Onsite consumption is permitted under the law in licensed establishments. Additionally, cannabis consumption near schools, university campuses are not permitted and can lead to a fine.

In short, possession, cultivation, and consumption of marijuana in Maine is permitted, however, only within certain guidelines and limitations which one must follow to avoid any legal issues.

The first medical cannabis law in Maine was passed in 1999. This law allowed medical patients in the state to grow their own cannabis plants. However, the spike in the cannabis businesses came after recreational legalization in 2016. Also, before that, there were no regularities for dispensaries to sell medical or recreational cannabis to the people.

As recreational marijuana took effect in the state, there were huge opportunities for the retail cannabis businesses, which somehow couldn’t start immediately after legalization and it took around 4 years from 2016 legalization to make cannabis sales in the region from October 2020. Even though the cannabis retail sale took effect a little late but it made over $100 million in business in the state, which was a very positive thing.

This huge business showed that the upcoming time in the state can make more revenue to the government and also this will give new opportunities to the cannabis-related businesses. In 2021, the marijuana sales tax remained 10 percent.

Apart from this, the state didn’t have any medical marijuana card scheme for accessing medical cannabis. Rather the medical patients can be prescribed limited medical cannabis possession for treating severe medical conditions. Though the supply of medical cannabis will be from the dispensaries in the state which are under controllable of the Maine Department of Health and Human Services.

Overall, the Maine state has a straightforward medical marijuana program in which patients after prescription can access medical cannabis from the authorized dispensaries.

How to Get the Best Quality Cannabis Seeds in Maine?

This is where online seed banks come into play!

If you want to access almost every marijuana strain on the planet then you must choose the online seed bank for your required marijuana seed variety. Additionally, they have direct sources from the breeders resulting in more fresh quality. The bonus point is that these online stores have seasonal sales or even regular offers, which can make you grab huge deals at a very affordable price.

Apart from this, searching out the best seed bank from many options is a little tricky task and can lead you to hours of research. Especially when you are new to the online marijuana market.

That is why after years of experience and reviews of other buyers have made us list here our favorite cannabis seed banks that directly ship to Maine. Let’s check them out, what specialties they have:

ILGM or ILoveGrowingMarijuana.com is one of the best online seed banks that directly ship to Maine. Even all the regions in the U.S. Have more than hundreds of cannabis strains in stock while keeping the price reasonable. Has multiple payment options along with instant customer support.

Join The I Love Growing Marijuana Official Sub for daily updates regarding ILGM on Reddit!

CKS ships worldwide and in a very private manner. Has a wide selection of cannabis seeds from the breeders and sells at a very affordable price. 24/7 online chat support along with excellent customer service. Almost every popular marijuana strain can be founded at CKS!

Crop King Seeds got reviews of the SeedFinder users, with an average rating of 5.18 out of 10!

Marijuana-seeds.nl or MSNL is known for its impressive categories of marijuana seeds along with a positive market reputation. With a 4+ rating on Trustpilot, MSNL is one of the most reputed seed banks that sells fresh quality cannabis seeds. Bitcoin payment option available with 10% off.

Here it is how:

The state has established the cannabis retail market last year (although the laws permitted it way back before) and it has made around more than $100 million in business. Also, it is the data of just one year. Therefore, one can get the idea that with upcoming time how much potential the state business has. Additionally, the 10% tax on commercial cannabis sales will add up to the state government’s revenue.

In short, Maine state’s marijuana businesses will shine more in the future until the government didn’t ban marijuana again!