Cannabis in Alabama is strictly prohibited though other states of the U.S have relaxed laws regarding medicinal marijuana and even for recreational weed as well in some states. However, recently the government was about to take some action that might favor the weed lovers in the state, however, somehow, it got stuck in between due to some reasons.

Let’s dig out deep and find out whether you can buy cannabis seeds in Alabama: 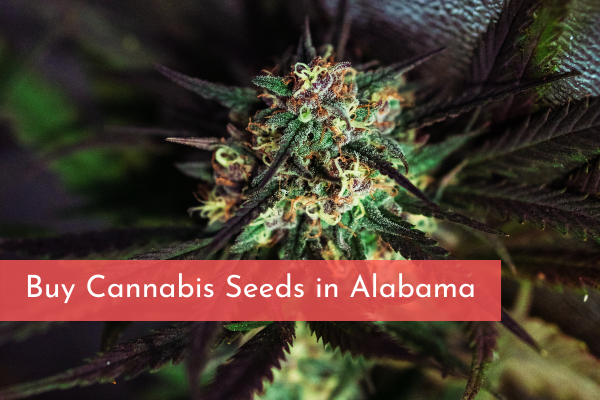 Is Cannabis Legal in Alabama?

In detail, there are many reasons and laws which ultimately prohibited cannabis to exist in Alabama.

Starting from the very earlier time of the 20th century, when the whole world was against marijuana due to its obvious reasons, authorities of the U.S banned cannabis consumption, possession, and even cultivation. Such actions also affected hemp cultivation in the country.

However, since 1931, cannabis in Alabama is banned, and even after these many years, the government couldn’t make cannabis legal officially.

Even when the world again reformed the laws to consider medical marijuana’s importance in daily lives, yet this state again tried but failed to implement it, unfortunately. There were many laws proposed by the state authorities but somehow, they didn’t come into action.

The latest example was when democratic state Sen. Bobby Singleton came forward to propose the Medical Marijuana Patient Safe Access Act in 2015, which would ultimately allow medical patients suffering from 25 different medical illnesses to get access the medical cannabis. However, the bill never reached the senate.

Coming to 2023, now, in Alabama, cannabis is illegal for recreational purposes. Concerning medical marijuana benefits, two different bills were in favor to legalize medical marijuana in the state, which we will be discussing further.

Therefore, in a nutshell, if you are planning a trip to Alabama and hoping to enjoy cannabis personally there then you might have to cancel your plans! The regulations and laws are strict for personal usage as recreational marijuana remains illegal in 2023!

Current Laws in Alabama Regarding Weed

There are strict guidelines that are in action in Alabama for recreational marijuana offenses. Therefore, while being in the state, you have to keep the guidelines and regulations in your mind.

Hence, the state authorities have completely avoided recreational marijuana, and therefore, thinking about cannabis there may lead you to some legal trouble, which you never want.

Apart from this, although recreational marijuana has strict laws, somehow, medical CBD content with less than 0.3% THC is permitted, however, it is only after prescription and from the authorized store only.

Overall, currently in 2023, the laws are against the use of marijuana for personal usage and have very strict behavior for the offender. Therefore, many bills were proposed by some authorities to reduce the penalties for non-medical use of marijuana, which are yet to come into effect.

Possession, Cultivation, And Consumption of Cannabis in the State

As said earlier, possession, cultivation, and consumption of recreational marijuana are completely illegal in Alabama state, and therefore, this will be treated as a criminal offense, which has very strict penalties. An individual found guilty of selling cannabis products with more than the limited THC level will be fined up to $30,000 and can be sentenced to jail for up to 20 years.

Additionally, selling or sharing cannabis to minors can lead the offender to up to 10 years in jail with a maximum of $60,000 fine.

Even for the CBD products, only authorized persons are allowed to sell the limited THC products. Those who have a prescription from a physician are permitted to have the CBD.

To legalize medical marijuana in the state, there were many bills proposed, however, they all die after some time. Overall, none of the proposed bills came into the effect.

In 2012, “The Alabama Medical Marijuana Patients’ Rights Act”, was proposed which was in favor of the patients with 24 different medical conditions being allowed to access the marijuana. For the patients to qualify for such a facility, they must have a prescription from the physician. However, after three years, the bill didn’t come into effect.

Similarly, after three years, a new bill was proposed by doing minor changes to the previous one. It was named as “Medical Marijuana Patient Safe Access Act” and this time it was proposed by Senator Bobby Singleton. The bill got passed by the Senate Judiciary Committee but failed to be approved further. If this bill was allowed, then within 25 different medical conditions, Alabama patients might be allowed to get marijuana access for their betterment.

However, CBD allowance in the state was only due to Carly’s Law for CBD trials in 2014 which was further expanded by Leni’s Law two years later. This 2014 trial was set to give non-psychoactive CBD oil to children with seizures as a clinical study. This trial ultimately helped the people to access CBD with limited THC levels.

Overall, in 2023, medical marijuana is not completely allowed in the state. Only CBD with a limited THC level is permitted to have after the prescription from the doctor. Therefore, until further action is taken to allow marijuana to be accessed by medical patients, it will be better to wait.

How to Buy Cannabis Seeds in Alabama?

If you are thinking to buy cannabis seeds in Alabama then probably you are making your plans with the cops! It is because just like possessing, consuming, and selling cannabis for recreational use is illegal, cultivating cannabis is the same offense.

Though an individual might possess seeds until or unless he or she didn’t grow them in the garden. Even for possessing only seeds, you are recommended to confirm from your local authorities. Additionally, cultivation of marijuana for medical purposes is also not allowed, therefore, medical patients can hope for CBD stuff only from the authorized stores.

Overall, you cannot buy cannabis seeds in Alabama as the state does not have physical stores publicly selling weed seeds. Even if anyone tries to get and grow then the authorities might interrupt you hardly!

Seed Banks That Ship to Alabama

Although the state has illegalized cannabis right now, however, the future might be positive for the weed lovers there. Well, if anyone wants to possess cannabis seeds for novelty purposes then he or she might do the same by confirming the local laws. Therefore, here are some seed banks that ship worldwide including Alabama.

As the state has no physical seed banks publicly, therefore, the only way is the online seed banks. Well, these are far better than physical ones as well because you will be having a wide variety to select your favorite seeds. Also, you can have huge discounts during the sale.

One of the reputed, professional, reliable online seed banks in the world. Ships worldwide with discreet packaging. Has multiple payment options and also delivery time is fast. The score at Trustpilot is 4+.

This seed bank is one of the popular seed banks around the globe. Has excellent customer support. Instant delivery of the orders with multiple payment options at the website. Reliable, professional, and reputed seed bank.

Well, there are some other seed banks as well, which might deliver you some best quality seeds, and services. However, these seed banks are sure to give you the best experience!

Alabama State has regularly demanded the marijuana exist legally. As some other states of the country have permitted cannabis to some extent, therefore, it is hoped that in the future, this state might take some actions in favor of weed lovers.

As before coronavirus shutdown in the state, there was a step to be taken for decriminalization for it, which unfortunately remained in between. Therefore, ultimately, the conclusion is that future of the state regarding marijuana legalization is bright.